MSP AND MSYP UNITE TO FIGHTBACK AGAINST PINNEYS CLOSURE PLAN

South Scotland MSP Colin Smyth and Emily Davies MSYP for Dumfriesshire have come together to fightback against Youngs Seafood plans to close Pinneys of Annan.

Colin Smyth is urging the local community to get behind a petition against the closure launched by Emily.

The move by Youngs Seafodd will see Pinneys, which was established in the Annan area over 40 years ago, close their doors for the last time in the summer with the loss of 450 jobs unless the company can be convinced to reverse their proposals.

The petition which was launched by Emily after hearing the news of the closure plan from her step-father, who works at the factory, and aims to try to save as many jobs as possible.

The petition is aimed at Youngs Seafood, Marks and Spencers and the UK and Scottish Governments and states,

“One of South Scotland’s largest private-sectors employers, Young’s Seafood are looking to close their Annan factory. Pinneys currently have many deals supplying food orders to Marks and Spencer’s and other supermarkets. As reported on the news, this closure will result in the loss of 450 jobs. At the same time as announcing this closure, Young’s have announced that they are are doing well with new contracts with M & S and are looking to recruit 200 new staff at their Grimsby Factory. This closure will result in many people losing part-time and full time jobs and many families losing vital income. Pinneys not only provides jobs for adults but many young people from across Dumfries and Galloway.”

Emily Davies MSYP for Dumfriesshire said, “I started the petition to unite the workers, families and the whole community against these closure plans. Pinneys is an important part of the area’s history. A lot of young people from across Dumfriesshire started their careers at Pinneys, and many have continued to work there. I hope the petition will show the level of opposition there is to the closure and spur others into taking action to help the local economy. It is vital we try to save as many jobs as possible and look at ways we can develop new jobs in the area. This is about supporting people employed at Pinneys just now but also the generations to come who will need employment locally in the future”

Colin Smyth MSP for South Scotland said, “I have been inundated with emails and phone calls from families who are having to deal with the prospect of losing their jobs and their stories are tragic.  It would be easy for people to sit back and do nothing. But Emily is fighting back on behalf of her family and the hundreds of others in the area affected by this devastating decision. I would urge everyone to show their support for the Pinneys workforce and back Emily’s petition. Emily is sending a strong signal that local people will not take this closure lying down”.

The online petition can be found here: https://www.change.org/p/young-s-seafood-company-save-pinney-s-of-scotland 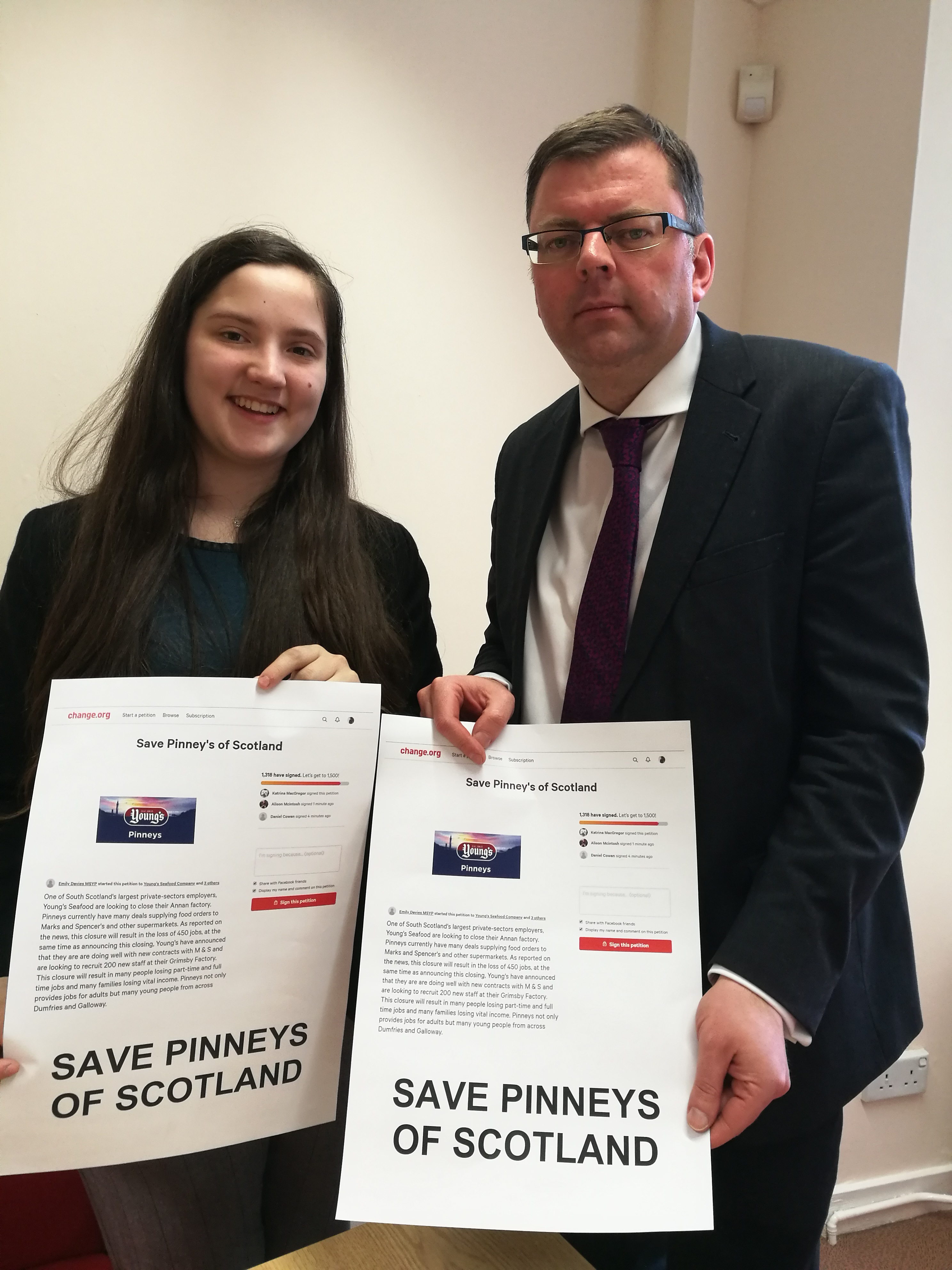